I wear jeans. my boobs are clearly visible. I play with them. I pee a lot in my jeans. it's fun. close-up you can see how the fabric of my jeans gets wet. That's great 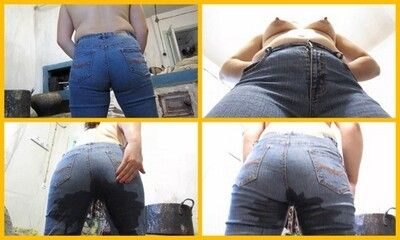 This poor slave is laid on the floor handled by his two mistresses on latex lingerie. He has two******bongs connected to his mouth and the other one on his dick, but these****** pongs are not intended for******s! The mistresses are in total control of the bongs. TheyÂre playing with their slave and treats him like their toilet. They spit and pee on the funnel that flows directly to the slaveÂs mouth, always ready to gulp anything his mistresses would give. The other mistress pissed into the bowl and poured it into the funnel connected to the slaveÂs dick. The mistress orders him also to piss to make their piss mixed. The mistress, later on, shoves the other side of the hose connected to his dick into his mouth. Making him GULP HIS OWN PISS!!!

This piss-freak slave takes a seat right to his mistress right before she takes a shower. While his mistress is still wrapped with her towels and ready to take a shower, her pathetic slave took his opportunity to beg for a piss! He just wants her to piss in his filthy mouth, like a human urinal. But before he gets what he begs for, the mistress wants to play her game first. She removes her underwear and puts it on her slaveÂs head; he looks dumb and gullible in his panty mask while sniffing it and doesnÂt give a damn about the stink. After obeying his mistress to lie down on the floor, she rubs her foot on his face while slowly shoving her toes into his mouth with the panties still on. As the slave plays his mistressÂ game, he also jerks himself off.

Becca is about to PEE into poor unaware Walter's drink. She will then make him SWALLOW her 'piss shots' by pouring it straight down his throat! Say hello to Masorotica's new barmaid!

After a break, the scatqueens take the slaves out of the dungeon. They are tied up and fixed to the floor. Then the scatqueens piss in the mouths of the toilet slaves.https://www.yezzclips.com/store598

I can feel a huge fart coming so I tell my toilet slave to lie on the floor, but before I fart right into his stupid face I decide to give him a special punishment. I punish the d0g well and then squat right over his nose and mouth and spray my ass gas all over his waiting slave face. He must feel so degraded and humiliated by this it makes me laugh hard all the way from my belly. He looks so pathetic! I also feel desperate for a pee, and decide to piss all over his face! I straddle over his face and completely cover him in my delicious golden shower and ****** him to keep his mouth open!

In this first clip, the mistress makes him wear diving goggles. He's gullible and has to obey his mistress. He first bends on the floor in a human-pet position and lets his mistress mock him and step on him. He then lays his back on the floor. His mistress squats on top of him, spreading her cunt, and drops all the piss on his slave-face. After catching all the piss, he licks his mistress' cunt for her pleasure.

This pathetic slave looks stupid on his diving goggles while serving his mistress. The mistress teaches him where her pleasure spots are that he has to lick or suck; her tits, her pussy, and her foot. While the pathetic slave lies on the floor with his stupid goggles and diaper-like underwear, the mistress gives him his reward for being a good boy; piss! The mistress squats and pees right in his mouth. But he can't waste any drop of it, so he has to lick every spill on the floor.

First one is right before a date--I use cucky's mouth as a toilet and fill him up with my pee, then put my foot on him and tell him what a loser he is. Next is me using my loser as my personal, human toilet! So hot!!

145690 - Drink the piss through my knickers - Princess Brook

IÂm bursting for a piss! Absolutely desperate!, and here's your chance to get under me and drink the piss straight out of my wet knickers. Im gonna pee right over your face and your gonna keep your mouth open and swallow it all like a good little piss drinker. That's it bitch, swallow all that golden glory as it shoots through the fabric of my knickers. You love watching me pee don't you! Get you mouth under under me as my yellow magic pours out of me. I want you to lap it all up for me so that i can see what a thirsty little piss drinker you are for me. Now get you mouth around my crotch and suck the pee out of my socked knickers. Good little toilet boy! Im so good to you aren't I!

my pussy is clean shaven. I pee in a strong stream. this can be seen in close-up. I also pee in my barn. then I stomp in a puddle of urine. my pussy is very clearly visible. 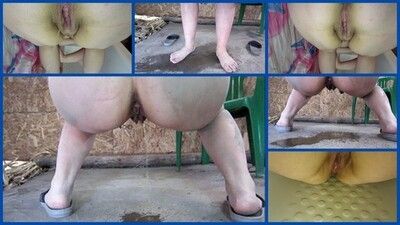 The slave is now undressed, and his head is sacked with the mistress' stockings, making his face uglier and look stupid. The mistress pokes a hole on the pantyhose but not to ease the slave. The hole is for her piss to go straight through his mouth without any spill. The pathetic slave bends back his head to let his mistress squat and pee in his mouth. The mistress makes fun of his ugly face sacked in stockings while her foot tramples on the slave's poor cock.

This pathetic slave looks stupid on his diving goggles while serving his mistress. The mistress teaches him where her pleasure spots are that he has to lick or suck; her tits, her pussy, and her foot. While the pathetic slave lies on the floor with his stupid goggles and diaper-like underwear, the mistress gives him his reward for being a good boy; piss! The mistress squats and pees right in his mouth. But he can't waste any drop of it, so he has to lick every spill on the floor.

I love to play with pathetic boys like you. I need a human toilet, are you ready for me toilet boy? Drinking my piss is as close as you'll get to me isn't it. Come on toilet slut, point that tongue out and get your head back for me so I can full your mouth with my hot stinking piss! Get close to me and open wide bitch. That's it, keep your mouth open and swallow it all like the toilet slut you are! When im finished im gonna use your tongue to clean me up too!

Pissed on and milked in the smotherbox! VIDEO IN GERMAN!Amber and Madame Carla piss Smirni full. While one of them is soaking his head in the smother box with her piss, the other peeing on his cock, which he wanked nicely. Then the two dirty sluts take turns and after they have emptied their bladders, they stand on his face with full weight while he is wanked hard.

I wear rubber boots. my legs are open wide. you can see my hairy pussy well. I pee in a strong stream in my bathroom. I also write in a big tachzik. it's very loud. 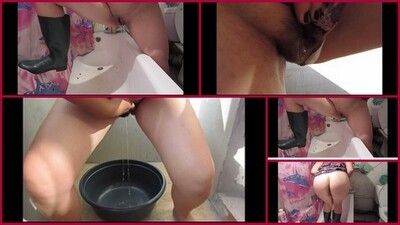