I need to take a break from my patients, my bladder is full! I can't resist anymore, the bathrooms are all occupied, only this shower is free ... my jet is so powerful that it even wet the whole floor!

156525 - Hot public outdoor piss in doggy style position from Tina and Rosella on the spa terrace!

I was on vacation with my best and dearest friend Dirty-Tina. We also did a wellness day and of course nasty piss actions. After Tina had pissed in my mouth (see video: Tina pissed in my mouth in the sauna! Dirty-Tina's premium champagne swallowed!), We both had to piss again. So we went one after the other to the terrace of the spa and pissed off in the doggy style position. So that everyone could see us in the hot piss action! Imagine you are lying under our hot piss pussies and we piss you, in this position, beautiful in your mouth!

The nurse takes a moment to relax from her patients, but she is an exhibitionist and doesn't want to piss in the toilet, she does it in the shower. However, its jet is so powerful that it even hits the entire floor! 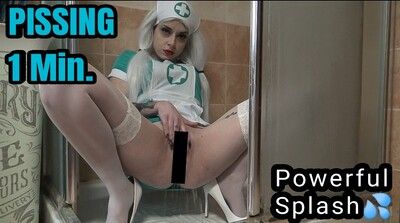 Missy Licks and I place special urinal latex masks on our rubber slaves so we can piss our golden showers directly into their mouths. Every single drop that isn't swallowed must be licked up from the floor - no drop will be wasted here!

Inside the comfort room of her office, this office lady immediately starts relieving herself! She pulls down her panties and sits on the toilet, but shortly after, a man barges in on her! He thinks he can get his malicious intentions, but the woman is fast to lift her pussy from the toilet and direct her piss into his face! She makes sure to shoot her piss into his mouth, catching him off guard and leaving him with no choice but swallow mouthfuls!By the time the dominatrix has completely relieved herself, she proceeds to bend over and smother the victim with her ass! She makes sure to push it hard against his face, making it difficult for him to breathe and leaving him with no choice but to eat her ass as well!

Miss Medea and I really need to pee... but instead of wasting our goldenshower, we decided to sprinkle each other with our divine piss. We wentoutside of the house and decided to get our juices flowing right here. I amMiss Medea is spreading her pussy above my boobs and my golden shower isstarting to flow on her body... Next I am pushing my round ass into the cameraand I stand right above Miss Medea's butthole and pussy, ready to pee on it. Are youready to see two Goddesses pee on each otherÂ´s boobs and booties? DonÂ´tmiss this sexy fetish clip. For me it was even a personal exploration of myfetish. I realized that I do not only like peeing on other people, I also enjoyreceiving another womenÂ´s urine on my body. It was such a sunny day outside,that the pee dried on our skin superfast! Good that I licked my finger as long asit was wet with delicious pee😉Models: Miss Medea Mortelle, Princess Nikki

My latex slave lies jerking in the clinic on the floor and is beautiful fully exhausted by his treatment today. Thirsty he is on top of it, I like to help him. I stand over him and let my precious champagne run. When it drips on his cock, he can no longer hold on to himself and squirts in a high arc. I piss of course further until everything is out. Finally there are a few domina kisses ...

Princess Nikki and I really need to pee... but instead of wasting our golden shower, we decided to sprinkle each other with our divine piss. We went outside of the house and decided to get our juices flowing right here. I am spreading my pussy above Princess NikkiÂ´s boobs and my golden shower is starting to flow on her body... Next I am pushing my round ass into the camera and Nikki stand right above my butthole and pussy, ready to pee on it.Are you ready to see two Goddesses pee on each otherÂ´s boobs and booties? DonÂ´t miss this sexy fetish clip. For me it was even a personal exploration of my fetish. I realized that I do not only like peeing on other people, I also enjoy receiving another womenÂ´s urine on my body.It was such a sunny day outside, that the pee dried on our skin superfast! Good that I licked my finger as long as it was wet with delicious pee ;)

Goddess Antonella is so dominant and superior, wearing black leather dress and panther print shirt. She rewards her slave to put him to make a nice foot fetish massage.After that she fulfill a glass of Champagne .The slave of her he drink it all.

Are you up for a long hike an a fun day out? Let's make the most of the lovely summer heat and hang around outside, even if it means a quick pee in the forest, bushes or mountains rather than looking for the nearest toilets. Just lift that skirt, slip those panties to the side and let the pee flow. A fun compilation of peeing outside.

I woke up this morning, went naked to the toilet. And slave husband sneaking up to me and aims his dick at me. His warm yellow stream of urine hit my chest. And from this warm, I relaxed and also simultaneously peed in the toilet. That's so good I went to the toilet

It has been in our outdoor area for quite a while . Today is also a really warm day . Since you can already times thirsty. Since I am kind with my objects, I give him of course something to drink. Freshly filled from the natural sparkling****** source in a glass . He puts it on and drinks everything obediently on

I was on vacation with my best and dearest friend Dirty-Tina. Of course we also made a wellness day! That felt really good in the dreary weather outside. We not only drank sparkling****** while taking a sauna, but I also swallowed Tina's delicious premium sparkling******. She pissed a huge load of her warm piss into my mouth while I was sitting in the whirlpool. Then we had a nice bath together in the pee water! You can see the hot pissing and swallowing from 2 camera perspectives so that you don't miss any of the hot action!